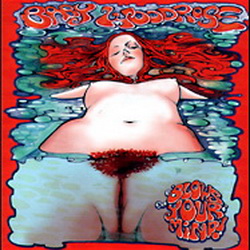 Re-release of the classic Baby Woodrose debut album. In reality a one-man operation by Lorenzo Woodrose who wrote the songs, played all the instruments, produced the record together with Riky Woodrose and put it out on his own Pan Records in 2001. More obscure, psych and lo-fi than the new stuff but the songs are every bit as cool! Presented in a daring sleeve by Malleus sure to raise an eyebrow or two. Listen to Blows Your Mind HERE