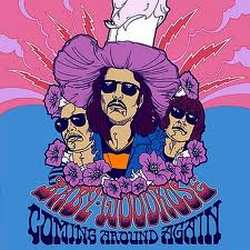 This Baby Woodrose 7” contains two exclusive songs only available on this fine piece of plastic. Both songs were recorded with the intension of being included on the album “Chasing Rainbows” but it never happend. Not because of the quality of the songs, they just did not seem to fit in. Main man Lorenzo Woodrose has this comment on “Coming Around Again”:

“Coming Around Again” could have been a hit for anybody, except we ended up playing it a bit too fast and adding lots of over the top twangy surf guitar and beeping Farfisa organ that kind of detract from it’s easy listening qualities. The end result is somewhat bubblegum sounding. Some uplifting lyrics about coming back up after having been down for some time. This one turned out much better than I thought it would during mixing. This was actually considered for “Chasing Rainbows” album quite a lot”

The B-side, “I Feel High”, was originally meant to be a kick ass rock’n’roll tune but in the process of the mixing it turned out quite differently. Lorenzo Woodrose explains:

“”I Feel High” is really different. If it wasn’t for the lyrical theme (sex, drugs, rock’n’roll) it would have fit well on the Chasing Rainbows album, where I deliberately wanted to go a bit deeper with my subject matter. Acoustic guitar, bass, tambourine and a hauntingly hypnotic Farfisa organ. We actually recorded this as a band, but felt it worked better sounding a bit folky and psychedelic. The intro was later pasted on, consisting of backwards drums and distant fuzzguitar”.