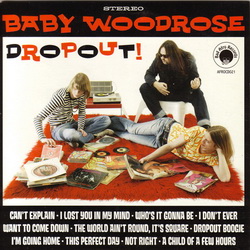 This album was not the follow up to the Money For Soul album from 2003, this album was a Baby Woodrose tribute to the garage groups from the 60′s that have influenced the band over the years. Includes covers of obscure stuff like The Savages, Painted Faces, The Lollipop Shoppe and The West Coast Pop Art Experimental Band to more well known territory like Captain Beefheart & His Magic Band, The 13th Floor Elevators, Love, The Stooges, The Sonics and The Saints. Everything gets the Baby Woodrose treatment and if you don’t know the originals you would think it’s new BW songs. Originally released on LP/CD in 2004. Both are now deleted. Listen to Dropout HERE