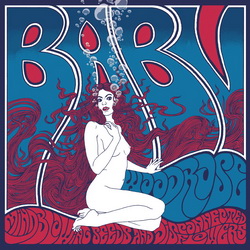 In 2011 it’s 10 years ago that Lorenzo Woodrose started his own label Pan Records and released the Baby Woodrose debut album Blows Your Mind. The album is still a favourite among many Baby Woodrose fans and along the years the album has sold almost 10.000 copies on LP and CD and an unknown amount of downloads. To celebrate the 10 year anniversary Bad Afro will release Mindblowing Seeds & Disconnected Flowers – a collection of 15 of the original 4 track demos that led to the release of Blows Your Mind. Below Lorenzo Woodrose explains how the album came about:

“In the late summer of 1999 I was in quite a difficult situation, having no home, no job, no girlfriend, no money and perhaps worst of all, the band I was playing the drums in at the time lost our guitarist, so I was even fearing I was without a band, something that has always meant a lot to me. Usually, I ended up crashing on the couch of my friend The Hobbit and often in our rehearsal room in a northwest industrial area of Copenhagen. Sometime during that summer I had also been introduced to the magic of the Woodrose seeds and somehow the experience, combined with my rather desperate state of mind, spawned a creative outburst of unforeseen proportions.

I decided to call the project Baby Woodrose, because several of the songs (Baby Blows, Living A Dream, Spinning Wheels) reflected my experience with the seeds earlier that summer. I had a vision of a vast ocean and I saw what I believe was an image of my creative potential personified in a naked woman, mysteriously filling one water bucket at a time, dragging them ashore and piling them up on the soft sandy beach. Somehow, I figured it meant that I just had to start working. For several months during that autumn, I did nothing but write and record on my little Fostex Multitracker X-30. The result was something like fifty highly distorted demo tracks in a sixties garage punk style.

I have always felt that the blueprint for the soul and spirit of Baby Woodrose is really within these very first recordings of my own, so it feels great to finally have them on vinyl and I hope some of you can appreciate the beauty of these rough diamonds. I have picked out 15 tracks, many of which also ended up on the album in final versions, but two of them were released separately under the alias Disconnected Flowers on a 7” which is virtually impossible to dig up by now and a few are previously unreleased. Polishing these tracks proved a thankless task, but luckily I still had most of the original master cassettes and the original tape machine, so this album is basically a 24bit digital dump and a careful remix of the stuff I think is the most interesting”. Originally released April 25th, 2011 on LP/CD and as download. The LP is now deleted and the last CDs are sold through the Bad Afro Recordstore.