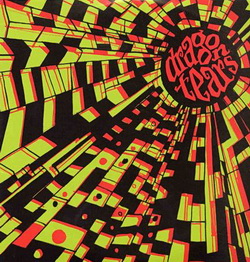 Dragontears is a project featuring Baby Woodrose and current and former members of On Trial. They wrote and recorded most of their debut album during a hazy week between Christmas and New Years Eve in 2005 in the Black Tornado studio in Copenhagen. An album fittingly called “2000 Micrograms From Home”.

The songs on the album began life as improvised jam sessions that eventually resulted in six songs of a very diverse nature. There is“Borderline”, an apocalyptic track assembled from various bits and pieces that are looped together on the computer, giving it a slightly mechanical feel. There is deep hypnotic drone in the 16 minutes long “The Doors of Prescription” and cosmic love in “Hobbittens Drøm”, a song with Danish lyrics initially intended for the Spids Nøgenhat album “En Mærkelig Kop Te” but never recorded.

All songs are linked together by sound effect interludes and are drenched in a psychedelic web of glockenspiel, autoharp, bubbly wahwah guitar sounds often played backwards, tambourine and strange sounds from vintage tape echo machines living a life of their own. And that’s just a part of it. Originally released on LP, CD and as Download in March 2007.

Listen to 2000 Micrograms From Home HERE