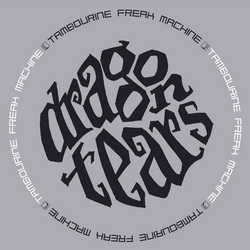 The second album by the Baby Woodrose side-project called Dragontears is entitled “Tambourine Freak Machine”. The album is musically quite similar to the debut album – “2000 Micrograms From Home” from March 2007 – but the band used a larger amount of electronics and the eternal quest for hallucinatory experimentation has made the music span a sligthly wider range, transcending musical styles like neofolk, psychedelic, space rock and electronica.

The tracklist includes the 10 minute drug fantasy “The River” which involves an impressive eight verses of illuminated spiritual delerium and is not a Bruce Springsteen cover. Also, another eight verses of righteous anger and loathing in “Masters of War”, which is in fact a Bob Dylan cover. Other highlights are a 16 minute dark hypnotic journey titled “The Freedom Seed”, which features Danish punk diva Janine Neble from Alive With Worms – and the electronic experimental track “Dreamweaver 2”, which features delicately noisy circuit bends from ex- Raveonettes Manoj Ramdas, absolutely molesting an out of date drum machine and some Japanese toy keyboard. Originally released Nov. 17th, 2008 on LP/CD and as Download.