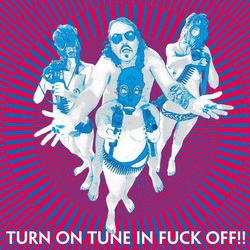 Dragontears released their 3rd album on Bad Afro November 1st 2010 following 2000 Micrograms From Home from 2007 and Tambourine Freak Machine from 2008. Dragontears is featuring members of Baby Woodrose and On Trial and this will be the final album in the Dragontears triologi. From now on the freakier and more experimenting parts of main man Lorenzo Woodrose´songwriting, which Dragontears very much represents, will be incorborated into the music on future Baby Woodrose albums.

Turn On Tune In Fuck Off!! contains 6 songs of a very diverse nature of which 4 are in English and two are in Danish language. There is “No Salvation” which can be described as groovy doomsday funk (!?) while “My Friend” is purely accustic. “Time Of No Time” is colourful psycedelic rock with fantastic dual vocals that ends in a drone while “William” is drone all the way through and clocks in at almost 14 minutes.

The theme of the album is doomsday and it is the closest Lorenzo Woodrose has ever been to writing a concept album. He has been inspired by various conspiracy theories and the gloomy lyrics and underlying message can be boiled down to one line from “Time Of No Time”: “The raven is coming, end of transmission”. First edition of the LP contains a free 7″ featuring two exclusive songs.

Listen to Turn On Tune In Fuck Off!! HERE