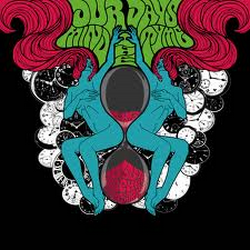 The Dolly Rocker Movement formed in late 2002 in the inner surrounds of Sydney, Australia. They are influenced by late 60´s garage, psychedelia and West coast folk. The charismatic band leader Daniel Poulter writes beautiful and well-crafted songs and beneath the psychedelic and colourful surface The Dolly Rocker Movement is simply a great pop band with a destinctive sound of their own.

In 2006 they released not one, but two critically acclaimed contemporary psychedelic masterpieces. The first, Electric Sunshine, illustrated the chemically enhanced blend of folk, garage and country that characterised the band’s early set. The follow-up album, Purple Journey Into the Mod Machine, adopted as its thematic premise a journey through space and time with even more impressive songs as the result.

Our Days Mind the Tyme owes it’s genesis to the psychedelic 60s, and the influence of Sky Saxon, Arthur Lee and Syd Barrett, yet sparkles as bright, and fresh as the morning sun. From the baroque pop of “A Sound for Two”, to the tight garage licks of “My Heavenly Way” and “Sold for Sinners”, to the billowing pop elegance of “The Only One” and “The Ecstacy Once Told”, this is an album touched by the hand of spiritual enlightenment. Our Days Mind The Tyme was released 22.02.10 on LP/CD and as Download.

Listen to Our Days Mind The Tyme HERE