‘Take Good Care Of Me’ will be released as a single September 7th and is taken from the upcoming The Love Coffin debut album “Cloudlands” due out September 28th.

The Love Coffin’s songs are all about contrasts – be it in the music, which shifts effortlessly from finely spun melodic melancholy to searingly dissonant bursts of noise – or their lyrical themes, which can best be described as pendulous journeys between ominous, tar-black depths of despair and bright shafts of cheek-blushing optimism.

Sure, you might be able to glean bits and pieces of the patchwork of influences that has led to The Love Coffin’s sound – particularly the unforgiving, magmatic squall of the New York noise rock scene of the 80’s, the sepia-dusted, grimy wide-screen perspective from the post-punk that came out of Australia in the same era and last, but not least, a knack for burying lush pop hooks under a rough-hewn bedrock of ugly guitars, Trojan horse-style, not unlike the pioneers of British shoegaze did it.

This band, though, is first and foremost a beast of its own making. Beneath the bruises you will find both tenderness, raw-hearted honesty and a dizzying talent. These five guys are here, they’re now, and they’re going straight for the jugular.

The Love Coffin is Jonatan K. Magnussen on vocals and guitar, Kristian Alexander Pedersen on guitar, Lasse Christiansen on keys and guitar, Tue Einar Bakfeldt Fly on bass and Alexander Vitus on drums. Sylvester Roepstoff is playing bass clarinet on ‘Take Good Care Of Me’. 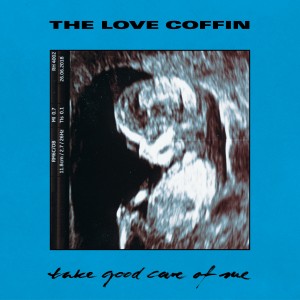