In the past couple of years Copenhagen-based five-piece group, The Love Coffin, has established themselves as one of the most noteworthy and potent acts on the Danish rock scene. It started with the release of EP’s Veranda (2015) and Buffalo Thunder (2016) and continued in 2018 with the critically acclaimed debut album Cloudlands on which the band continued to unfold and explore their signature sound marked by melodic shoegaze-hooks, gloomy atmospheres and epic soundscapes of biting noise rock.

Now the darksome rock outfit is announcing the release of the new single “Nothing at All” from a forthcoming album on Bad Afro Records, the label also responsible for Cloudlands. “Nothing at All” is produced by the band’s guitar player Kristian Alexander Pedersen and English producer Guy Fixen whose prior work includes collaborations with Pixies, My Bloody Valentine, Breeders and Slowdive as well as releases on legendary record labels such as Creation, 4D and Beggars Banquet.

“Nothing at All” finds The Love Coffin soaring in an either of lonesome Americana-vibes. The song is driven forward by a well-placed string section and the haunting harmonica creates an intriguing yet sinister mood along with the acoustic guitar phrases and lead singer Jonathan K. Magnussen’s expressive vocals.

One of The Love Coffin’s main assets has always been their passion. That has been proven numerous times at their acclaimed live shows and the very same intensity and nerve can be heard on “Nothing at All”, where the band also discovers new sides of themselves. 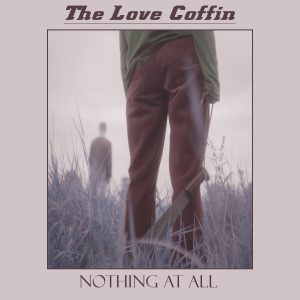