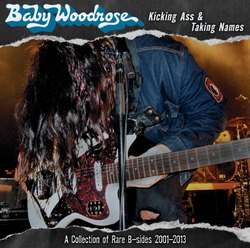 Kicking Ass & Taking Names is a compilation album of Baby Woodrose vinyl 7” b-sides and rarities collected from various releases from the past 13 years. Besides b-sides and split singles released on Bad Afro Records the album includes b-sides from singles released on Swedish, French, Norwegian and Greek record labels. It also includes a cover of “Beat City” by The Raveonettes.

Most of the songs were recorded by the original line-up of Lorenzo Woodrose (vocals/guitar), The Moody Guru (bass) and Fuzz Daddy (drums). That goes for the self-released debut 7” on Pan Records which originally was released in only 300 copies. The two songs – 6654321 and That’s How Strong My Love Is – comes from the very first studio session Baby Woodrose did as a band, only a few months after the release of the Blows Your Mind album which Lorenzo Woodrose released on his own.

The probably most interesting session included here is five songs recorded pretty much live in the Black Tornado studio during the making of the Chasing Rainbows album in late 2007. It was the last recording by the original line-up but the songs never made the album but ended up as b-sides instead. The first five songs on the album documents that session.

This collection of songs from the 14 7” singles Baby Woodrose have released so far is made for the fans who don’t collect vinyl singles or are not willing to fork over the cash for the often rare and expensive singles of which most are deleted years ago. First edition on LP is limited to a 1000 copies on black vinyl.