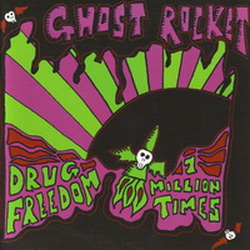 Ghost Rocket made a name for themselves in the Copenhagen underground rock scene doing gigs on their own and supporting bands like Electric Prunes and Baby Woodrose. Main man behind the band was Morten Aron who paid his dues in On Trial between 1986 and 1999 and was part of the legendary Spids Nøgenhat album “En Mærkelig Kop Te” in 2001 along with Lorenzo Woodrose. He also did 3 solo albums as Aron. Ghost Rocket was inspired by bands like 13th Floor Elevators, Love and obscure rock’n’roll and psych from the past 50 years and on this debut 7″ just about everything was fuzzed out to the max! The theme song “Drug Freedom” pretty much speaks for itself while the flipside “1 Million Times” is a bitter love song. Unfortunately the band broke up before releasing anything else than this classic single.