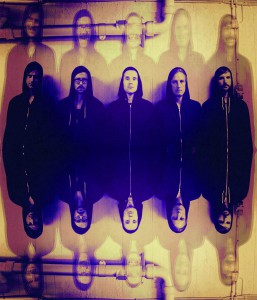 With ”Drone Head” The Janitors from Stockholm released one of the most interesting psych albums of 2013. In a time where psych bands seems to pop up everywhere “Drone Head” stood out with it’s dark, fuzzy and sinister songs. So Bad Afro had to sit up and take notice and the result is this 4-track 12” EP called Evil Doings Of An Evil Kind.

Evil Doings Of An Evil Kind is a collection of dark and noisy songs that are not aimed at the faint of heart. Almost all songs have a disturbing vibe as if you should not come too close risking a punch on the nose. On this EP The Janitors display a hypnotic, monotone and evil drone although the barbed wire fuzz rock often is infused by a melodic groove.

Here They Come has been chosen as the first single due to go online August 18th. It’s the first The Janitors song with a political edge and comments on the rise of the rightwing in Europe.

They have this statement which also has the support of Bad Afro: “Right Now Europe is experiencing a wave of political forces attempting to normalize fear, oppression and exclusion of people of other cultures, skin tone, sexual preference and in many cases other gender than their own. This band believes in equal right for everyone”.

The Janitors 12” EP was limited to 500 copies on black vinyl and was the second installment in the new series of 12” EPs on Bad Afro. It is now sold out.

Listen to Evil Doings Of An Evil Kind: https://badafrorecords.bandcamp.com/album/evil-doings-of-an-evil-kind-12-ep